NEW YORK -- Phil Jackson has asked New York Knicks season-ticket holders to "remain optimistic" amid what has been one of the worst seasons in franchise history.

In a letter and video message sent out on Monday, Jackson tried to reassure the team's fan base, saying he has a "clear plan" in place for this 2015 offseason.

"While I know this has been a challenging season for our team on the court, I can also tell you that everyone in the organization is working tirelessly to get our Knicks back to a place where we are once again competing at the highest level," Jackson said in a video message obtained by ESPN New York that doubled as a pitch to season ticket holders to renew for the 2015-16 season.

In the letter, Jackson talked about the roster moves he's made to clear up cap space for free agency. The Knicks are expected to have at least $25 million in cap space this summer.

"We have made key roster moves to free up significant cap space that will provide us greater flexibility to acquire talent in this summer's free agency," Jackson said. "And for the first time in many years, we expect to have a top pick in the NBA Draft this June. These are key steps to building a roster of players that have both the talent and character to win in New York and who, alongside Carmelo Anthony, will become a team that can become a consistent winner."

Jackson briefly acknowledged the failures of this season in the video and letter.

The Knicks enter play Wednesday with a 14-60 record -- the worst in the NBA. This is the first time in New York's 69-year franchise history that the team has lost 60 games.

"Despite the disappointing 2014-15 season, we are steadfast in our resolve to do what is necessary to deliver on our ultimate goal of bringing a championship back to New York," Jackson said.

Jackson signed a five-year contract reportedly worth $60 million dollars to take over as Knicks president a little more than 12 months ago.

He inherited a team that won 37 games in 2013-14 and entered this season hoping to make the playoffs.

But the Knicks suffered through losing streaks of 10 and 16 games in the first half of the season as Jackson's signature trade for Jose Calderon proved to be a dud in Year One. He blew up the roster in a January trade that sent J.R. Smith and Iman Shumpert to Cleveland for two second-round picks and two trade exceptions.

Now, Jackson hopes to land a top pick in June's draft. If the Knicks finish with the worst record in the NBA, they will pick no lower than fourth in the draft.

In his message to persuade season-ticket holders to renew, Jackson focused on the months ahead rather than dissecting the missteps of the 2014-15 team.

"We have a clear plan and expect our efforts to take really take shape as we enter the 2015 draft and free agency in the months ahead," Jackson said in the video. "I ask that you remain optimistic and hope you will join us on our continued journey as we build a team that once again reflects the spirit of being a New York Knick." 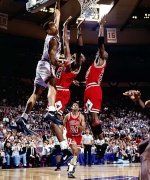